Computer Science and Programming for Homeschoolers

One of my favorite things to talk about. It is something I know well, and enjoy doing: computer science and programming for homeschoolers. My big kid has been very interested in programming at some point in his life. Beyond basic computer literacy. There are so many resources to go about this, it is easy to get lost in them. Here are some that we have used in the past and enjoyed.

Computer Science and Programming for Homeschoolers

Lets start with the wonderful and self directed Khan Academy.  What doesn’t Khan Academy have? It is so fantastic and a great resource for such a variety of subjects. For programming there is Intro to JS: Drawing and Animation, Intro to HTML/CSS, Intro to SQL, Advanced JS and so much more! Check out their computer science courses here.

Another great starting point is Codecademy. They cover quite a few programming languages: HTML and CSS, Python, JavaScript, Java, SQL, Ruby and more.

Udemy also offers a lot of courses, for a small fee that are fun to do. We have tried several over the years.

At some point my kids wanted to do something While the courses I mention above are really great, the lessons were a bit disconnected from one another.  In doing my research we stumbled across this book: 3D Game Programming for Kids: Create Interactive Worlds with JavaScript .

This book is awesome! AWESOME! The author writes it specifically for kids, and the kids respond to it.  There are jokes in there.  Who doesn’t like jokes!? The author has the kids use JavaScript in ICE Editor that runs in Chrome. My kids have both started the book from start, and kept working on their programs.  There were a few technical difficulties along the way, that they had to work through.

There was a point where one of my kids made a mistake in his code and it took him a while to work through it.  He almost quit over that, but I insisted that he comes back to it for half an hour every day, and eventually he worked it out.  You should have seen his face when he finally resolved the issue he was having.  So happy! I am also happy that he stuck through it, and worked on it!  It was a wonderful and important lesson.  The kids work on a game, from start to finish.  They work on the character, and controls.   Here is what one of my kids game looked like at some point (it’s a screenshot of the game he is working on): 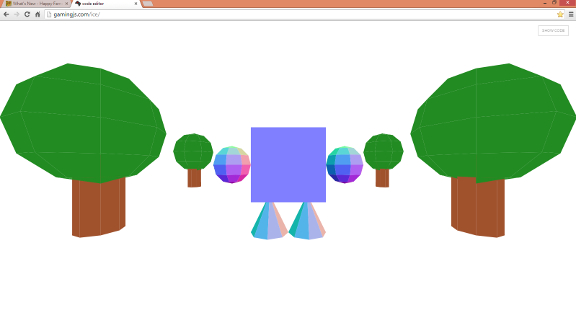 If you feel so inclined, you could download a simple java compiler and try playing around with it. At some point my kid and I made a mean math program that was rude when you got the answer to the question wrong.  It was a good experience, though a bit dry.  He got the program to display a simple math question using random numbers (had to learn how to generate the random numbers first), accept a response, parse it into a number.  Then he would check the number he got against the solution to the question, and give a response.  Since the program was titled Rude Math Teacher, the response was kind of mean, including bits about taking away your cookies and eating them while you were busy solving the math problem.  What can I say, it made it more fun to have to come up with all sorts of snarky things the program could respond with.

Another thing that I often turn to when I don’t know something in this area is W3Schools Online.

Other websites to check out:

1 thought on “Computer Science and Programming for Homeschoolers”

Read more about our newsletter.

Our awesome, not so well organized, yet fun to browse, tags:

***Please know: this website contains affiliate links and advertisements. You should also know that we are participants in the Amazon Associates Program: www.TheHappyHomeschooler.com is a participant in the Amazon Services LLC Associates Program, an affiliate advertising program designed to provide a means for sites to earn advertising fees by advertising and linking to Amazon.com. Every so once in a while I recommend the products and books that I have enjoyed. The links to these products will take you to www.amazon.com. You can see our full Copyright, Privacy, and Disclaimer Policy.***

This website uses cookies to improve your experience while you navigate through the website. Out of these, the cookies that are categorized as necessary are stored on your browser as they are essential for the working of basic functionalities of the website. We also use third-party cookies that help us analyze and understand how you use this website. These cookies will be stored in your browser only with your consent. You also have the option to opt-out of these cookies. But opting out of some of these cookies may affect your browsing experience.
Necessary Always Enabled
Necessary cookies are absolutely essential for the website to function properly. This category only includes cookies that ensures basic functionalities and security features of the website. These cookies do not store any personal information.
Non-necessary
Any cookies that may not be particularly necessary for the website to function and is used specifically to collect user personal data via analytics, ads, other embedded contents are termed as non-necessary cookies. It is mandatory to procure user consent prior to running these cookies on your website.
SAVE & ACCEPT